Hello, my name is KXI and welcome to the next ever Flash Impressions. A first impression type of review, to simulate a users first reactions to a game while having a somewhat experienced gamer to give direction. This is not a full review, just what the game has brought to me in the first few moments of playing the game - when most players make their move to rate it. I am writing this while playing the game to insure the best and unbiased first impression. Today's game is Comic Book RPG's Immortal Souls - Dark Crusade!

Wow I managed to type that out during the loading screen, well with that out of the way I am aware this is not a new game but was taken off Armor Games for having too many bugs. I haven't played the buggy version so if this is buggy then we already for see the outcome. Enough with the chit-chat time to play! 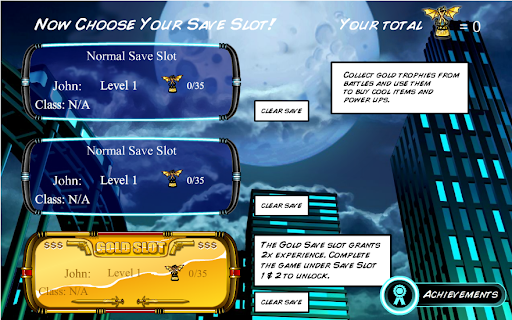 Okay, I probably didn't capture it but that opening animation was amazing. The devil could be a bit buffer but dang! So far for impressions this one is looking good, but I poked around the achievements and the exit button seems to be misplaced. Its either that or I haven't been reading too many comics lately, I'm a manga kind of guy. One last thing I have to say is that the game has a shiny gold save slot that unlocks after beating the game twice, forced replay ability here but I'm not arguing. Now on to save slot 1! 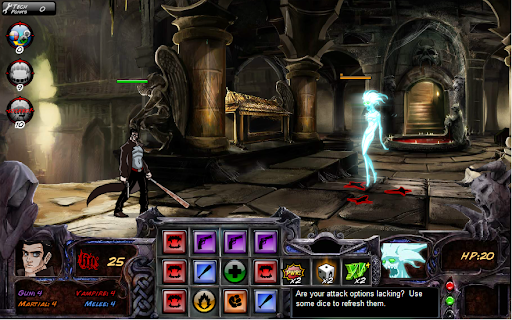 Now a class screen, who do I want to be? I'll chose the old school warrior, why not? And wow this game has great menu screens, if you haven't guess it I'm loving the art style and the music is the standard "Epic Move" track. Loving it so far, now I guess start mission means some game play? :P ALRIGHT LETS DO THIS! LEEEROOOY JEEEEN....

Just finished the tutorial battle, I have to say the combat in this game is different. Not bad, but not really meaty. Now I'm in this inventory screen... once I figure it out or break something I'll get back to you.
Okay everything seems to be working expect the music, it might be a bug or it just timed out. Anyways I'm fully equipped and ready to go, just that I noticed I'm playing as the male from the opening cut scene. I wonder if save slot two brings me to the female character? Strange system they have there but I'm not arguing. I'm gonna see what else I can do and I'll get back to writing. 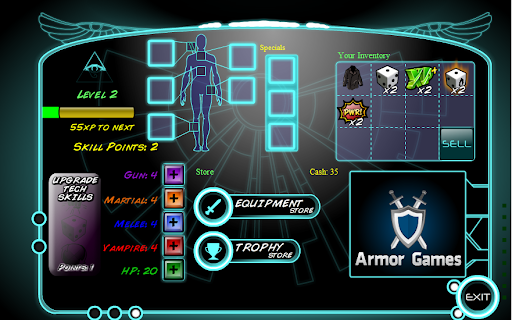 Woah speech cut scene! I'm apparently named John, and I have unlocked a new chapter - LETS GO! Another cut scene with more story, I gotta say the art in the animation game and speech are completely different but similar if you know what I mean. Well I'm gonna play a good chunk before I come back and finish this up.

Just played through the rest of that level, my final thoughts. Its a solid game, some mechanics are a bit wonky and you could pass them as bugs but overall game play is solid - art and music is fantastic. So if your looking for a RPG with a bit of Final Fantasy Match three match up go for it. That about does it for me on this game, and I'll see you next time for the nest Flash Impression.

If you have any questions or concern about anything, or just want to comment please visit my profile or contact me at KXI.SYSTEM@Gmail.com.

Yay, the images seem to be right and the text fine. Though the images aren't in the order I want it looks better than the first one.

hi, I complete the 2 sav with all gold trophys, and the achievement "earn all the gold trophy in one save slot" dnt work, i dnt care about that

but i cant play in the gold sav, its abug? or i need to beat a final boss or somethig that i dnt see?

i wanna try the class thtat i dnt play, but without clearing one sav

hi, I complete the 2 sav with all gold trophys, and the achievement "earn all the gold trophy in one save slot" dnt work, i dnt care about that

but i cant play in the gold sav, its abug? or i need to beat a final boss or somethig that i dnt see?

i wanna try the class thtat i dnt play, but without clearing one sav

Hi, according to what I found you have to beat the final boss to beat the game. At least I think its what they mean, and do the same with the other slot to unlock the gold slot.

It maybe a bug, I haven't got as far as you yet so I can't say for sure.

ahhhhhhh but where and who is the final boss, the last battle is Chapter 8 - round 7. I dnt see a boss or other round

Aguilera87, That may be a bug, I'll look into it

We're also working on a fix for the equipment issue, hopefully it will only be another day or so.

Yeah I can't play in the gold save slot after beating the game in both slots 1 and 2. All the chapters show 100% complete and I've gotten gold trophies on all the battles. Gold save slot still won't work.

Playing scoundrel at level 2-2, how can i get the gold?
There are 2 enemies, and i have to win the battle in 1 turn or less.
Bug?

I couldn't even figure out how to finish the tutorial thingy.
I didn't get it.
Couldn't understand anything.
Too many bugs.
Got the Super nerd freak emo vibe from the game.
Didn't finish the tutorial.
Just horrible game I thought.... Bad time. Coming after amazing games like Learn to fly 2, Last Stand: Union City, Kingdom Rush, and Exit Path 2.

Just because you can't finish the tutorial doesn't mean it a bug, you see the section with the guns, bats and stuff? Match 3 of those.

Playing scoundrel at level 2-2, how can i get the gold?
There are 2 enemies, and i have to win the battle in 1 turn or less.
Bug?

Aguilera87, That may be a bug, I'll look into it

We're also working on a fix for the equipment issue, hopefully it will only be another day or so.

Glad to see that you are working on fixing your mistakes, you made a solid game anyways and I give ye kudos!

my save erases every day, why is that?