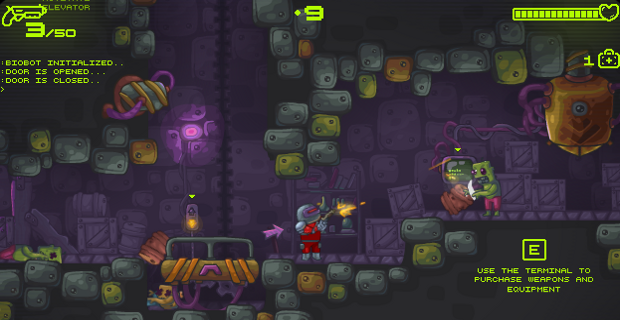 Zombies, man. You can’t live with ’em, and you can’t live without… well, no, that’s it, really, because a zombie roommate would kind of suck, even apart from the whole “my flesh, my flesh, it’s eating my flesh” thing. I’m pretty sure they can’t pay rent, you’d be forever picking bits out of the furniture, and out of work C-list celebrities are forever dropping by to do “cameos”. But zombie games? Now, those I’m on board with. If you’re looking to put a little putrefaction in your day, here are five tasty zombie games to put some drag in your step. Feel free to share your favourites! 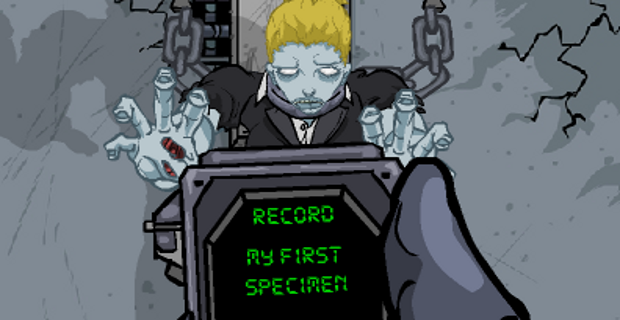 Evil Dog and SickDeathFiend’s Lab of the Dead features a bit less pew pew pew grr argh BAAAAAAAAARBRA when it comes to the zombie apocalypse, and a lot more questionable science. In it, you play a scientist who’s holed up in an underground lab after the end of the world, performing experiments on the undead, and only kind of for kicks and giggles. See, your theory is you can interact with the restrained zombies and prompt reactions that will further your research and maybe, just maybe, work towards unlocking some hidden spark of humanity buried inside them… and a way to control them. Because THAT’S bound to turn out well.

Lab of the Dead is, bluntly put, a weird little game, but that’s why we like it. While you can whack away at your zombies with sticks and other weapons, there’s something strangely rewarding about coaxing out less animalistic responses to things like books, toys, and meat that didn’t come off of a person. Seeing your zombie look puzzled and vaguely sad when presented with a child’s teddy bear instead of shrieking in mad fury just may make you feel a little more kindly towards them… or maybe you’ll just keep beating them with sticks. I don’t know your life. Research new objects and reactions as the days progress to unlock more content, and presumably some extra “haha”s on your MUHAHAHA mad scientist laugh. 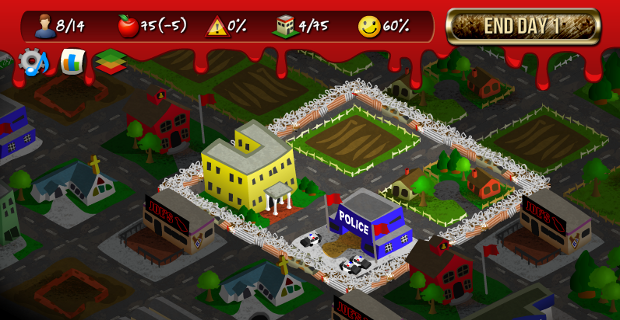 Look, I know the end of the world seems… bad. There’s no WiFi, pizza delivery is non-existent, and without the internet, you’re going to have to find new ways to express rude anonymous opinions to strangers. But that doesn’t mean we’re all going to sit around banging rocks on cave walls for all eternity! Sarah Northway is pretty sure you’re the right choice to lead humanity into this brave new world, and in her turn-based strategy sim Rebuild 2, your cup runneth over with choices and potential. You’ll start off with a small colony of survivors, whom you’ll need to keep happy and fed, and need to expand and explore the randomly generated city to find new allies, convert derelict buildings into useful structures, and more. Just make sure you have people on hand to defend the place if zombies get wind of you.

What makes Rebuild 2 stand out from other sims is how much freedom you’re given, and the wide variety of endings to unlock. Do you squash a strange new religion that begins to rise through your settlement? Maybe you keep the discovery of a shack in the woods to yourself. Or maybe you’ll devote precious resources to trying to find a cure. Scenarios frequently arise that require you to make choices that aren’t always cut and dry, and often have consequences beyond what you might expect. It’s that rare combination of simple to pick up, yet also compelling and complex, making it hard to tear yourself away from. All it’s missing is a wonky synthesized ’80s soundtrack and for you to choose who will betray you first… the weird, weathered, stoic survivalist who says things like “Everyone closes their eyes sometimes,” or the wise-cracking, disconcertingly smug everyday Joe Schmoe. 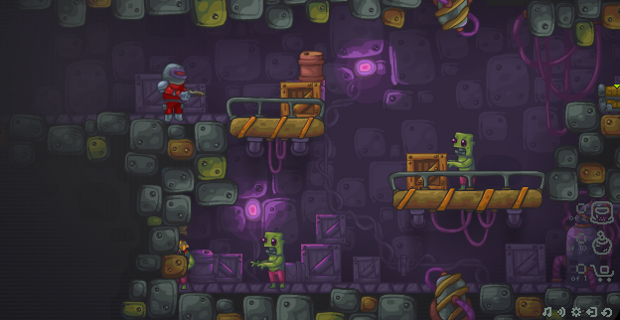 Zombotron sounds like some Daft Punk/Michael Jackson’s “Thriller” tribute brand, but actually it’s a clever physics-based platformer by Ant Karlov that will make all your dreams of offing zombies using an assortment of flaming barrels, precarious crates, bottomless pits, and of course, the gentleman’s choice, the gears of a heavily descending elevator. As you explore the levels, tracking down secrets and coins to upgrade your arsenal, you’ll quickly learn that there are a wide variety of ways to kill zombies aside from mere bullets, and the game will pop up with a description of each one as it happens.

Unlike a lot of other zombie games, Zombotron isn’t particularly gory or explicitly violent. There’s a weird, Looney Tunes-esque vibe to everything that sort of makes one wish it had some sort of madcap, Benny Hill-style soundtrack. Trying to figure out how to meet each level’s optional objectives usually takes a bit of thought and planning, though blasting your way through the destructible bits of scenery to crush your enemies beneath an avalanche of rubble is always satisfying on its own. I mean, you get me when I say that, right? That’s why I love you guys. You’re way more understanding than my therapist. 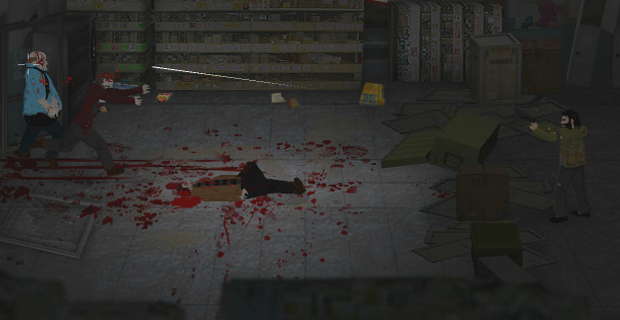 Con Artists Studios has been making sweet zombie games for years, but if the MMO aspects of The Last Stand – Dead Zone don’t tickle your proverbial fancy, then The Last Stand 2 might just have coyly dropped its kerchief at your feet. In it, an escape attempt from an apocalyptic zombie scenario goes awry, and you find yourself stranded with 40 days to reach Union City before all boats and aircraft leave for good. Playing the game means fending off the zombies that sprint at you to try and tear apart your shelter during the night, then spending a few precious hours trying to figure out where you should scavenge for more weapons and the supplies needed to travel. The clock is always ticking, after all.

The Last Stand 2 blends a lot of different elements, like gentle supply and time management, but its core gameplay boils down to defending your wall each night against the undead. Most of the useful things you scavenge are traps to impede the zombies’ progress, but you can also find better weapons, and even survivors who you can arm to fight alongside you when night falls. Unlike some defense game, your wall is not automatically repaired between levels, so you’ll need to choose when to allocate some time to fix that up if you don’t want to be torn to shreds. Don’t forget to allot time to create your rockin’ zombie road trip mix tape. I recommend Party in the USA and Bad Romance. 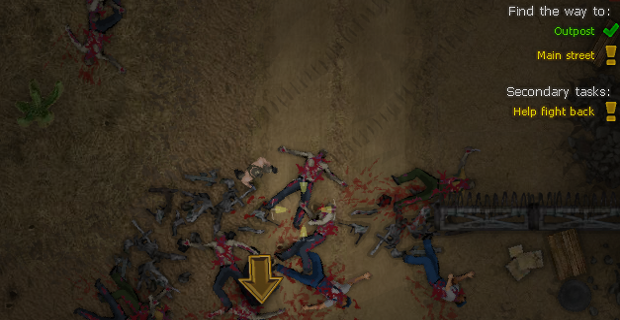 You know a game isn’t messing around when it sets its logo on fire. FlyAnvil’s Decision 3 is set, like most zombie games, after the end of the world. You control a grizzled fellow who’s set off trying to find a place to start over and exist in a world where everyone has come down with a bad case of dead. He winds up working for a small band of survivors in a crumbling city, doing odd jobs for the military presence that calls the shots there. And everybody knows you can always count on the military in a post-apocalyptic scenario where they represent the only law! All we’re missing is Danny Trejo and an unscrupulous businessman played by John Malkovich or Dennis Hopper.

Decision 3, like the first two titles in the series, is essentially a top-down shooter with some town-building elements. You explore dangerous areas filled with zombies, complete objectives, and find survivors, all while trying to keep your face firmly attached to your skull despite what the local monster population would prefer. As you clean out locales, you can capture them for your own use and build helpful structures, and even improve your own abilities and arsenal. Why, it’s like you’re the Johnny Appleseed of the wastes, dispensing stoic justice and headshots across the land! It’s practically a bedtime story.