We caught up with Nick Pasto to talk about the development of the “Phoenix Temple” level in the anticipated release of Super Chibi Knight. If you loved the classic Chibi Knight, you should be as excited as we are for this epic (yet adorable) title! Read the full article for a chance at winning a special Super Chibi Knight T-Shirt…

Why Was It Necessary?
The creation of this level grew out of feedback from the alpha testers of Super Chibi Knight (you can sign up as a tester here: http://www.SuperChibiKnight.com). They noticed that the pathway to become a “Beast Master” in the game was a lot shorter than to become a “Sorcerer.” ie: The number of tasks/quests/missions required for the Beast Master path was much smaller than the other route… which means most people would probably just become a Beast Master and possibly never see a ton of the other cool content in the game, and maybe never realize that the other specialization path even EXISTS. That would be BAD! 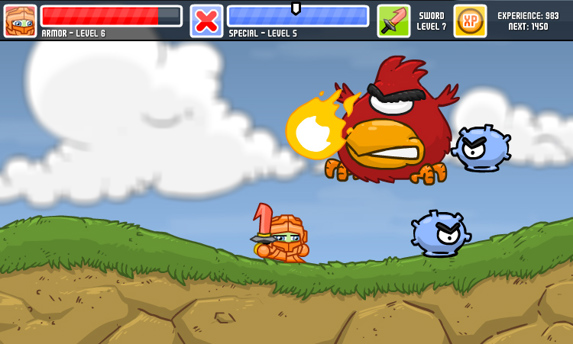 Originally, you could find these fire-breathing Phoenix birds on either the grass plains or in the desert overworld maps. When you killed them, they would drop a flaming egg, which you could pick up (if your armor was strong enough) and take back to the Beast Master Mountains entrance to unlock the door… I put in the armor limitation because I didn’t want people to be able to accomplish this significant step in the game too early, but what ended up happening is people would just sit there and grind up their armor without exploring the rest of the game because they saw a quest and couldn’t leave it alone ’til it was done!
The lesson for me from this was to not put in toll gates based on leveling up, but rather base them on finding items from quests (especially early on and with significant story paths). So I decided to expand on the Phoenix birds’ story a bit and have them inside an ancient Phoenix temple trapped in cages protected by a giant magical lock. So your mission becomes to find the magical key to the magical lock and free the birds, THEN you can slay them on the overworld maps to get their eggs. The toll-gate, then, is the key which will be awarded by a drunk NPC character when you accomplish a two-part quest for him to wake him from his drunken coma.

Thus, you are required to explore more and become more immersed in the game and the lore before you can take this significant specialization step.

I went with a “bird” theme for the temple because of the “Phoenix Bird” imagery. I imagine the back story is something like this:
Once there was a small group of friends that lived in the Kingdom of Oukoku who loved bird watching. They met every Tuesday to trek through the mountains and forests to find and catalogue all the varieties of birds in the kingdom. They even designed special instruments that allowed them to see things that were far away as if they were right in front of their eyes.
One fateful Tuesday, Gruber, a passionate member of the bird watching society, had separated himself from the main group to explore a strange noise he heard coming from over a ridge. Once there he took out his observe-o-scope and pointed it toward the sound. What he saw was indelibly seared into his eyes. It was a majestic One-eyed Flaming Phoenix furiously flapping its wings to carry its rotund body up and into its nest of glowing eggs where its partner, equally astounding in appearance, waited. He quickly gathered his fellow bird watchers to the same spot and pointed them in the right direction, but none were able to locate his birds. On the long hike back home, Gruber quickly became the brunt of many jokes and he began to wonder himself whether what he had seen was real or just an imagined vision.
Gruber eventually grew distant from the other bird watchers, but his love of birds did not decrease… rather it increased to the point of obsession. Gruber soon added Thursdays to his bird watching schedule, then Saturdays, then EVERY day… and even though he filled his book with detailed descriptions and drawings of all the varieties of bird he saw, none occupied his mind more than the One-eyed Flaming Phoenix. He began neglecting his wine shop in town. His family wondered what had happened to their husband and father. He eventually turned the family wine business over to his cousin who had always REALLY enjoyed his wine. 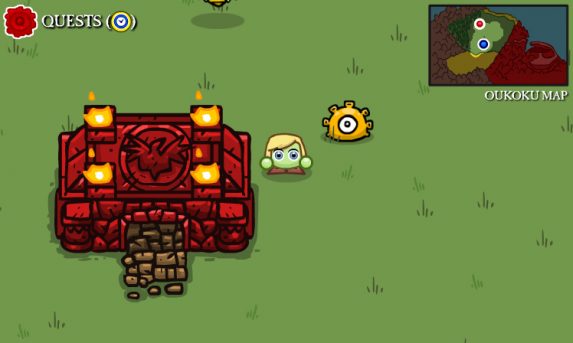 Far on the edge of Oukoku’s grass plains, on the border of the desert, Gruber began a new project… a shrine to the One-eyed Flying Phoenix. He quarried the stone from the nearby Yajuu mountains and hauled it to his construction site. He carefully sculpted each brick, statue, and dais in this new temple dedicated to all things avian. Rumors began to circulate that Gruber had lost his mind and had begun meddling with dark Beast Master arts forbidden to be used without direct training and supervision by the Beast Master Society. Some visitors were able to scale the temple steps and discovered that, on the temple roof, Gruber had carefully constructed 2 metal cages which they could only assume were intended for the capture of the two Phoenix birds he had claimed to see.
The last sighting of the foul fowl afficionado, Gruber, was a Tuesday night when he was seen hauling sparkling stones into place to block the entrance to his temple shrine. He could be heard muttering garbled incantations and speaking of a Guardian he had summoned to protect his treasures. Many wonder whether he was ever able to find the birds he coveted so dearly. He also shouted something about a magic key as he slid the final stone into place to seal the entry way. 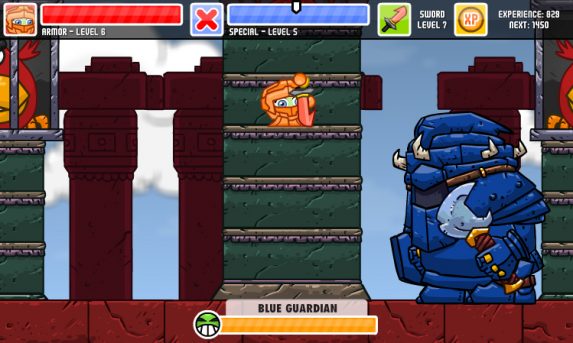 The spire cauldrons of the temple burned for weeks after the entrance was sealed and a general feeling of dread clung to the location like tar. Eventually, the spire cauldron fires faded and then disappeared but none dared approach the temple for decades thereafter for fear of a curse. Just three days ago, the spire cauldrons spontaneously lit again, an event many believe coincides with the appearance of monsters roaming the kingdom anew. But no one is able to penetrate the enchanted stones blocking the entrance, and no one really wants to see what’s inside that temple anyway…
Phoenix Temple Trailer:
If you wish to see the full Live Stream video click here!
Thanks for reading! If you’d like a chance to win a free Super Chibi Knight T-shirt all you need to do is post what you love about the game in the comments. Good luck!

Want to support Armor Games and the indie developers we publish? Sentry Knight Tactics, a challenging and charming real-time strategy game by the creators of the hit Flash series, is now available on Steam. Check it out!