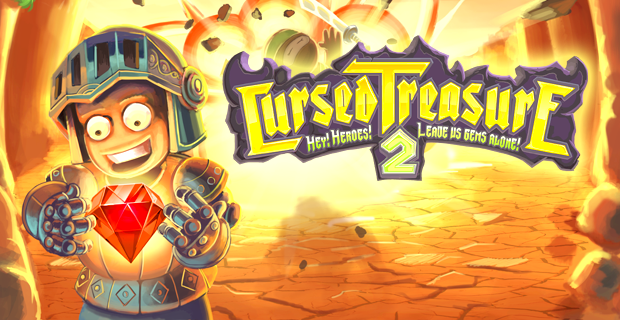 They say it’s good to be bad. At least, it is when you’re playing the bad guy in a tower defense classic like Cursed Treasure 2. Created by IriySoft, the game has been a favorite of genre fans for years across multiple platforms. And now Cursed Treasure 2 is available on Steam for $2.99 its first week, to give fans the option to support the developers, and a way to enjoy the classic game as part of their collection forever, optimized for desktop play with new UI, achievements, and crisp HD graphics. Check out Cursed Treasure 2 on Steam now!

If you’ve never played the game before, Cursed Treasure 2 puts you in the flowing, evil robes of a dark lord who just wants to keep their cache of magic gems safe from the heroes attempting to cart them off. You’ll place towers of undead, demons, and orcs throughout each level, upgrade them in different ways to unlock new abilities, and try to incinerate the waves of heroes before they reach the goods. You’ll go up against invisible ninjas, flying angels, heroic paladins, and many more, each with their own tricky powers to overcome. You’ll learn new spells and skills, unlock new tower abilities, and more. Each level can also be played in “Night Mode” for the added challenge of less illumination to spot those pesky do-gooders.

While the browser version will always remain free, we wanted to bring the game to a wider audience to allow those who chose to do so to support the game, and show our appreciation for its talented team. We hope you consider checking it out, and helping us spread the news. As always, thank you for your support of indie creators!