i saw her standing there 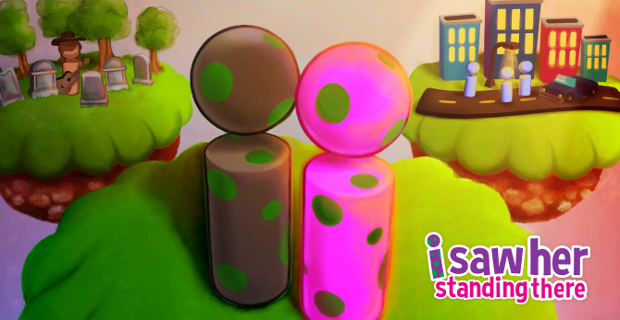 Well, here’s one for you… would you still love someone if they were a zombie? The star of Nick Yonge’s wildly popular Flash game series i saw her standing there isn’t about to let a little something like an insatiable hunger for the flesh of the living turn them away from their beloved. The series, which currently has three free online titles and an upcoming large commercial release, varies its gameplay and plot in each installment, but the themes of true love and rotting flesh persist throughout. They’re remarkably sweet and optimistic little games, a breath of fresh air for anyone looking for something bright and funny, and most certainly not what you’d expect from a typical zombie game. There’s no blood, no violence, and it uses colours other than shades of grey and red!

So grab somebody you love and hold them close (though maybe out of reach of any tender, vital spots) as we take a look at each game and where the series is going next. They say you always hurt the one you love, but sometimes nothing can stop romance… not even George Romero or Shinji Mikami.

When one of you is a zombie, you have to work at certain things, just like any other relationship. Communication is important, sure, but… maybe not quite as important as keeping your skin intact when your beloved would rather peel it off as an appertif. i saw her standing there, the first title in the series, is a puzzle platformer at heart, as you try to figure out how to lure your lurching lover to a cage so she can’t chew on you, without getting eaten in the process. This involves some quick reflexes, sure, especially when other zombies are added to the mix, but also careful planning to get her safely behind bars without getting hurt herself along the way.

If it sounds silly, well, it is. But what makes i saw her standing there unique is how happily earnest it seems. The story narration, which unfolds at the start and end of each short level, is surprisingly sweet and funny. You know you love her, the game insists, because she’s always trying to hug you. Personally, it takes a lot more to inspire my eternal love and devotion, but I guess an eternal commitment to devouring your flesh is still a commitment. And a compliment, when you really think about it! After all, what’s a nibble or ten between you and the person you love?

Granted, even if you’ve ever been in the sort of 1990’s sitcom scenario that involves you tearfully hollering at your parents that they “just don’t understand” your new beau, who they claim is a bad influence on you, you might have rethought your point of view if the outcome had involved less tearfully sobbing into your bed while listening to Seal’s “Kiss From a Rose”, and more joining the ranks of the undead. In i saw her too, with lasers, this time you’re acting playing the role of a well-meaning scientist who wants to cure the pair of star-crossed lovebirds from the first game, who are now both zombies.

The gameplay here is more puzzle oriented than anything else. You can’t control the zombies directly, but your goal is to manipulate their surroundings to guide them to one another. Flipping switches controls lasers, platforms, holograms, and more, usually with an emphasis on reacting quickly to avoid your loving lab rats tumbling off into infinity, or accidentally frying them to a crisp. If all of this seems a rather… convoluted and dangerous way to cure someone, well, turns out the cure is all the way back in the lab, so you’re leading them to it. Why? “Shut up, that’s why,” the game admonishes you. Hey, what do I know anyway? My best subject was never science anyway. Omelette du fromage.

You can keep your tragic tales and your bittersweet ballads. For my money, there’s nothing more satisfying than a happy ending, and i saw her across the world is exactly that. After customising the colours and pronouns of your zombie couple, you find yourself setting out on an epic game of tag and hide-and-seek as you follow your dearest across a surprisingly big world filled with different environments to explore. Each area is unique, and has its own hazards to overcome, like the wild beasts of the forest and caverns, or the hustle and bustle of the human-filled city. Sadly, the game does not include a level where you and your dearest trek your way to the Winchester for a pint and wait for all of this to blow over.

Each time you track your zombie paramour down, you’ll swap to playing the other character for the next round… tag, you’re it! There’s much more of a classic platformer feel this time around, with moving platforms, enemies, and, yes, secrets to uncover. Most zombie stories about the end of the world tend to feature a lot more heavy metal soundtracks, ammunition, and/or Woody Harrelson, but i saw her across the world feels like the perfect optimistic sunset for the series that has finally come to an end… or has it?!

Coming later this year on Steam, i saw her standing there, not to be confused with the original game, is an end-of-the-world zombie adventure about two people who didn’t let death get in the way of love, and set out to find the rest of their family. This time, the gameplay blends puzzles with real-time action. The goal in each stage is once again to reunite our zombie heroes, along with nabbing the bonus pancakes along the way (obviously), but doing so means navigating tricky top-down levels filled with ghosts, plummeting pathways, moving walkways, and much, much more. Like, 300 levels worth, not counting all the player-created possibilities thanks to the included level editor to make and share your own.

As a series, i saw her standing there has always been willing to experiment and evolve, and this latest keeps the whimsy and weirdness intact, while offering up gameplay that challenges your brain and your reflexes. It’s a big, meaty game with a lot to offer, especially if you’re looking for something relentlessly cheerful that’s going to brighten up your entire gaming library just by existing. You can follow the development on the official Twitter account, check out the trailer and details on the official website, and, of course, watch this space for more news. So the next time you find yourself face-to-face with the undead, don’t immediately resort to violence. Maybe, just maybe, all they want is someone to reach out, trust them a little, and MY FACE, MY FACE, HELP HELP IT’S GOT MY FACE!