Our good friends at IronHide Game Studio, have notified Armor Games that Kingdom Rush has been stolen! Here is what  happened:

“On October 21 it came to our attention that there was a version of Kingdom Rush for sale on the Appstore by the name “Kingdom Rush TD” by my Yayi. When we checked it, it was in fact a bad port of our game “Kingdom Rush” using our art, sound and music assets and cloning the gameplay. We were devastated of course, we worked for almost a year on Kingdom Rush and in around 3 months these guys stole our work and started selling it as their own.

We didn’t made this public earlier because we trusted that Apple would do the right thing and remove the app swiftly when presented with the evidence. Sadly its been around 18 days and the app is still there despite our countless mails to remove it.

We contacted Armorgames of course to make them aware of this and they also got in touch with Apple, we also hired the DMCA.com takedown service, sent over 20 emails along with copyright infringement notices to Apple and although the dev removed the app for a week, they published it again last friday. So since Apple is not answering or doing anything we decided to make this public and seek the support of the online community.

“Kingdom Rush TD” is a horrible port of Kingdom Rush, they did terrible work, no polish at all, most mechanics are badly implemented and it is plagued with bugs… in fact it is a trap for the unwary thinking its an official version of the game. They even charge you for extra gold and lives.

The official version of Kingdom Rush for iOS is almost ready, and it would be terrible to have to compete with the stolen app.

We think this is happening to often, and it really hurts the free flash game industry. As developers, there is no incentive in making a polished flash game if there is always some shady developer in wait to steal it and sell it without consequence.” 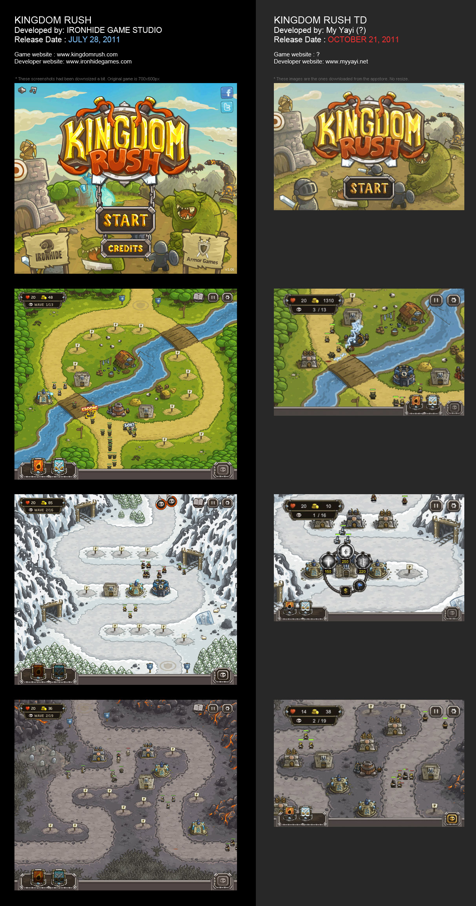