Yesterday I launched a game called I Love Traffic.  Gameplay consists of moving traffic through an intersection without causing collision, backup, or running out of time.  Any and all lights can be turned any colour at any time! 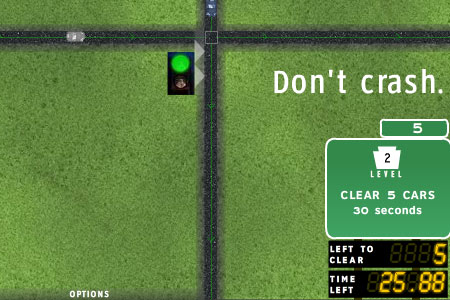 There’s a bit of story behind why it was made.  In all honesty I hate traffic.  I get caught at every single red light on my way home and it is not because I am a bad driver.  It’s because my car is cursed!

My car has the amazing ability to turn traffic lights red.  Whenever the light is green in my lane the approach of my car will instantly flip it to red.  It’s some amazing phenomenon that occurs and others have started to see it too.  Even when other people drive the car they make note of its bizarre supernatural traffic light interaction.

So on my way to work one day, I pondered, “How can I make traffic and intersections more fun?”  And after a few brainstorming sessions I started building models of roadways and the ways cars interact while on the road.

I created some basic principles to apply to all vehicles:

A) Vehicles drive only as fast as the car in front of them.  If a vehicle reaches within 1 – 2 vehicle lengths away it will decelerate to match the speed of the vehicle in front.

B) All vehicles accelerate and decelerate at different rates.  Everyone has different ways of driving and different vehicle types to facilitate those habits.

C) Vehicles have a maximum speed and cannot go backwards.

D) Vehicles will not stop unless they have reason to (other vehicle, intersection, etc)

Since these principles apply to traffic lanes, it only made sense to make each lane function as it’s own little ecosystem.  Lanes then interact with each other through overlap and collision!

That’s where I found the game. 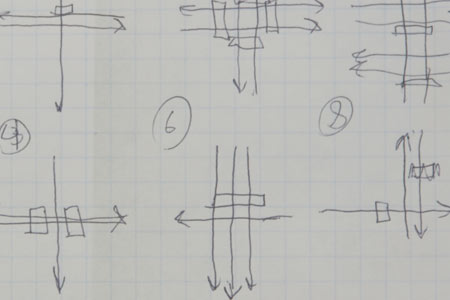 After sketching several lane layouts I built 20 fundamentally different designs that enhance different types of lane interaction.  Obviously there are traditional 4-way intersections, but the game’s flexible lane-by-lane style opened up new interactions.  One lane crossing several, like design #6 above, creates walls of car backup to deal with.  Meanwhile design #8 (above) deals with cross-traffic and watch multiple directions at once.

And from there the game was made.  Different vehicle types helped facilitate different experiences each time the intersection was revisited.  Trucks were made slow, police cars super fast, and motorcycles were made to accelerate faster than any other vehicle.

That said, the game is finished and out on Armor Games!  Go Play I Love Traffic, let me know what you think!