Strap on plate mail, pick up a sword and prepare for battle! Quests have launched on Armor Games allowing you to face various difficult game challenges and earn badges to show your friends.  You may have Quests already, check your profile page.

Check out all available Quests here! 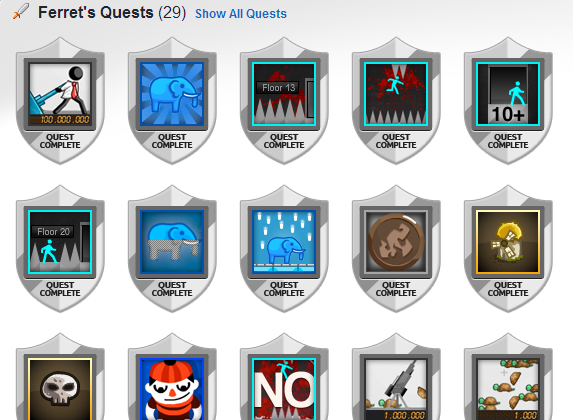 > What happened to Armor Points?

Armor Points have been removed from the site in exchange for Quests.  We’ve found that many users spent their energy trying to acquire the points by thoughtlessly commenting to collect points, and that doesn’t celebrate playing games.  And playing games is what Armor Games is all about!

> What about my old rank?

All ranks have been given a “Legacy Quest”, meaning all your work is still visible to all your friends.  We respect the time and effort you’ve put into your title and we didn’t want to take it away from you.  You no longer can increase your rank.

> How will Armatars be handled?

Some very high AP Armatars will be kept exclusive to those of high legacy ranking.  The majority will become available to all users.

> Will there be a new ranking system?

Currently, nothing we can talk about.  But we welcome feedback!

> How are new Quests decided?

Developers and Armor Games craft them in a secret laboratory.

> I have an idea for Quests…

We want to hear your ideas.  Either go to the forums, or comment at the end of this Editorial – I’ll be gathering everyone’s feedback. 🙂