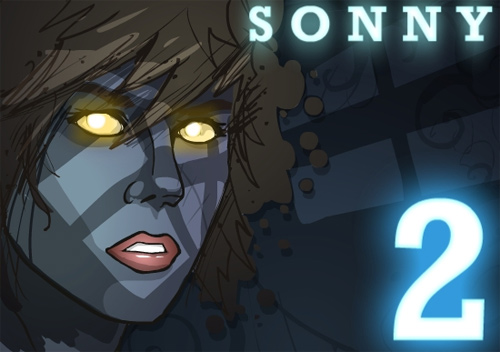 I recently had the opportunity to ask a few questions to Krin, the creator of Sonny and the mastermind behind one of the most popular RPG releases on the web.  A few fans (including myself) have been curious about the production and release of Sonny 2 so I asked Krin if he would spill a few beans and he most certainly did!  So without further ado here is an interview with Krin about the latest version of Sonny.

John: Tell us a bit about your team.  Who is involved and what roles do they play in the creation of Sonny 2?

Krin: Some of the people who are working with me on “Sonny 2” include David Orr, Joan CG, Will Arbuckle. David Orr is a musician, who also did the soundtrack and effects for the first Sonny. His new tracks for “Sonny 2” are currently being composed, and I think they will sound more distinct and powerful than before whilst retaining the feel of the original Sonny soundtrack. Joan CG is an illustrator from Spain and also a great friend of mine. We’ve been working together since games like “Crimson Warfare” and “Sinjid:SotW.” Now he is back, and will be crafting the characters and landscapes in Sonny. Will Arbuckle, the creator of the “Edible Castle” series will work with me and Joan to bring you some high quality cut scenes to help with the narrative of the story.

John: What stage is Sonny 2 at?  Can we get a estimation of when we should see it on Armor Games?

Krin: We’ve finished upgrading the actual engine and system of the game, so now we’re working on things like enemies, items, abilities, and of course, the three classes. We still have to design most of these things, both in the mathematical sense and in the graphical sense. I can’t tell you when it will be released, because I don’t know myself. In the past few months, most of the team including me have been locked down by things like final exams which is why we haven’t made much progress, but things are going along pretty fast now. It will be released when it’s COMPLETELY ready 🙂 Quality cannot be rushed.

It’s been taking such a long time because the game is bigger than Sonny in a lot of ways. We recently talked about maybe having to split the game in half since it’s become so huge. Each Zone in Sonny 2 probably has more story progression to it than the whole of Sonny 1, and there are going to be at least 6 main story Zones (unless we split it), and several other bonus Zones that will also have interesting story motifs, but not be the driving force of the plot. Think of it as “Zone 4” but with better integration.

John: How will Sonny 2 pick up from the first Sonny in terms of narrative?

Krin: The plot was something that received a lot of complaints about. We listened to every single complaint and we made the storyline one of the main focuses of Sonny 2. People said it ‘trailed off,’ and ‘it was too short,’ and the people are always right!

We’ve worked hard on the new plot, and I think you will find the story to be more engaging and coherent than in the original Sonny. So no more random Samurai ghosts and angry shamans. Doesn’t mean we’ll take away the characters’ dark sense of humor and one-liners though 🙂

As usual, a lot of the plot will be narrated through dialogs during battles, and the rest in cut scenes. In the worse case scenarios we might need to pop one or two boxes of text post-battle for you to read 🙂

John: Questions were left unanswered from the first, for example many wondered what was on the tape Louis gave Sonny at the beginning.  Will we see these questions answered?

Krin: You’ll hear what’s on the tape, and you’ll be thinking “Krin was probably high when he did this.” And no, it’s not a Rick Roll or anything of that nature.

You will also find out what happened on the ship the day Sonny was resurrected. You’ll get answers to most of questions presented in the original Sonny. Of course, those answers will just be the beginning 🙂

John: What are some of the new features of Sonny 2?

Krin: The AI has been improved and friendly AI is designed so that you won’t need to depend on them so much anymore, so the chance that you lose a fight because your AI teammate randomized the wrong ability will be much less. I’ve decided I don’t want to give players full control of the AI. There are plenty of games that do that, and I think it’s more interesting to have to work WITH the AI rather than control it completely. What you ARE able to do though, is to tell a teammate to fight in a different style. The 5 modes of AI are: Phalanx, Defensive, Tactical, Aggressive, Relentless. You can change it in combat.

Bosses and fights can now have ‘phases.’ For example, once you get a boss down to 50% life, he might say “Now I pwn you!” and starts using completely different skills and fighting styles, so your tactics and strategy are REALLY put to the test this time!

There is also a ‘hardcore’ more to play on. This mode will be like the normal mode, except each turn you have a limited time to make your move. I’m thinking of making it so that the faster you make your move, the more effective it is and the less likely it is to miss. This will put pressure on you and make it more intense and challenging.

John: Sonny 2 is upping the ante with three classes and ability trees.  How hard is it to keep the game balanced and fair in gameplay?

Krin: Since there is not yet any multi-player interaction, balancing the classes basically means that the game is equally fun to play for all three classes. This can still be hard though, because we need to make sure all bosses are beatable with any class. And since the classes all have different ability trees, we’ll need to make bosses have more than one weakness (unlike the bosses in Zone 4 in Sonny, where there was only 1-2 viable tactics per boss). This doesn’t mean we’re planning to make it less challenging though. We’re actually hoping to make the endgame of Sonny 2 even more intense.

The actual ability trees themselves will be more flexible and useful than before. And example ability from the Biological class is “Crystallize.” It stuns the target for a couple of turns, yet at the same time shielding it from all damage. This could be used both on friends and enemies, for both defensive and offensive purposes.

John: What are some of the other challenges you are facing in creating Sonny 2?

Krin: Writing the story was hard. When we made Sonny, we never really thought people would be so interested in the story, so we left a lot of open ends. The challenge in Sonny 2 was to find a way to create a story that would be coherent with the first one, and also very exciting to experience on its own, AND also explain the loopholes we’ve left in the first Sonny.

John: Any thing else you want to mention about Sonny 2?

Krin: Before people have had to wait up to a year for a new release of my games… And Sinjid fans are still waiting for 3+ years (I haven’t forgotten about you!). Don’t yell at me for having to wait two months 😛 We’re going fast, but we won’t release it until it’s reached the quality we want! I’ll get some screen shots when we are a little bit more progressed!

There you have it.  Don’t yell at Krin, he’s working hard and it makes him sad.

We’ll try to keep up with Krin and his team as they work through the various portions of the new Sonny game.  Thanks Krin for the interview!