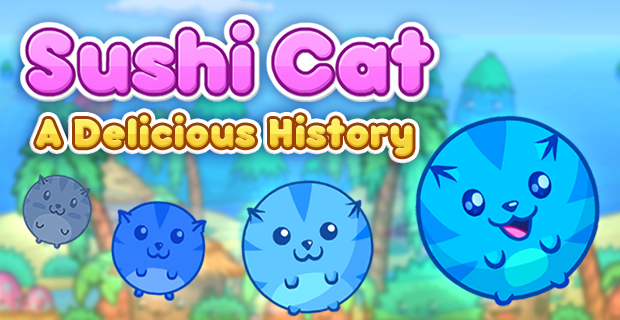 He’s blue. He’s blobby. He’s covering that outfit you laid out for tomorrow in fur right this very second. But you’d love him no matter what he did, because Sushi Cat can do no wrong… unless it’s devouring an untold amount of money in sashimi and nigiri, of course. Since 2010, this perfectly pudgy purr-machine has been delighting millions of players with his unique brand of pachinko-style puzzling.

It’s true that the internet is kind of obsessed with cats, but Sushi Cat doesn’t stand out from the crowd so much as he smooshes it beneath him. How has this cat kept players coming back for more for over half a decade? Let’s hop into the Wayback Machine and take a look right meow! 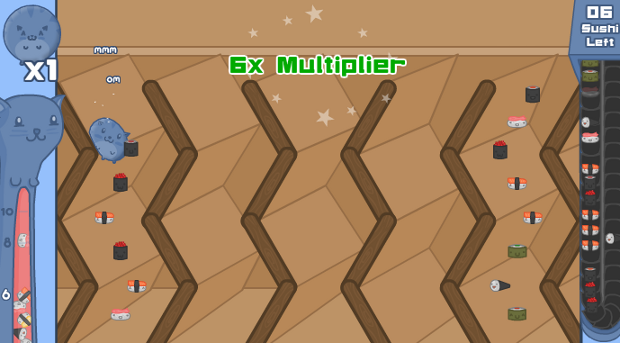 ‘Twas love that first sparked Sushi Cat’s journey. He was instantly smitten by a pretty purple kitty in a window, but found out he wasn’t heavy enough to activate the automatic door to get to her… a backdoor compliment-style excuse I’m totally I’m going to use the next time I’m late for something. So how does he decide to plump up? With copious amounts of sushi, of course!

The physics-based gameplay was fairly straight-forward. In each level, you had to eat a certain amount of sushi, and you had a certain amount of “lives” to do so. You’d drop Sushi Cat from the top of the screen and watch him tumble along the path, bouncing off obstacles, and gobbling up any sushi in his way, getting bigger all the while. Predicting how Sushi Cat would bounce wasn’t always as simple as it seemed, however, and getting every single piece of sushi proved tricky as the levels evolved. 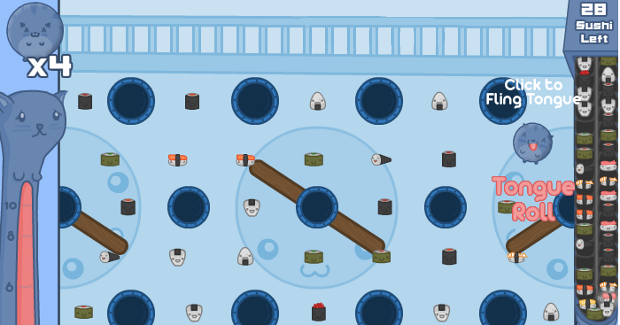 What good is a love story without a happy ending? Sushi Cat sets sail with his, ahem, plushy paramor, but when the ship starts to sink, Sushi Cat knows there’s just one thing to do to save the day… use his prodigious posterior to plug the hole! Naturally, this involves eating even more sushi, which is a horrible fate oh noes. Sushi Cat the Honeymoon was released as a sort of level pack extension of the original game a little while after its release to celebrate the advent of Sushi Cat for iOS, so the gameplay is very familiar, though considerably more challenging right off the bat. While it doesn’t reinvent the wheel (or the California roll), its addictive gameplay, powerups, and adorable animated cutscenes brought players back for more.

Dogs… they’re trouble, I tells ya! Just when you think they’re all cuddly and smelly and harmless, they go and steal your beloved… at least, that’s what happened to Sushi Cat in the sequel when he was out for a stroll at the mall. Naturally, this is a problem that can only be overcome by contacting the authorities and filling out a reporHA! Just kidding! You totally need to bulk up with yet more sushi!

Making a sequel is always hard to do, since you run the risk of making a game that either doesn’t innovate enough to avoid feeling like a rehash, or changing it too much and alienating your fans. Mercifully, Sushi Cat 2 squeezed by these issues to become a hit. The visuals felt crisper and brighter, and the physics felt even more natural (as natural as physics based on a magical elastic cat can be said to be), the levels quickly became more elaborate, as did the cutscenes, and, well, you could gather up special golden sushi to unlock new outfits for Sushi Cat. They have your number.

More sushi? More unlockable outfits? Don’t mind if I do! As the title implies, this next installment jumps directly off the previous game as Sushi Cat and his cuddly companion get separated while attending a rowdy parade and festival. No prizes for guessing what the solution to this problem is going to be, unless you count playing the game as a prize like I do! The gameplay by this point feels familiar in a good way, as its core mechanics are tightened and polished further to make Sushi Cat’s squishes and bounces feel faster and more responsive. The levels are also bigger (longer? taller?), which means actually trying to plan your cat’s path is even more important. It’s practically a metaphor for life… if what you’re doing doesn’t lead you to as much sushi as humanly possible, you’re doing it wrong, grasshopper.

Just when you thought Sushi Cat was going to be tumbling blissfully through life forever, in 2014 things took a surprising turn when a chance at a lifetime supply of sushi leads him to enter a contest to race to the moon. How? By building a device to hurl himself bodily through the air at dangerous speeds, of course! Instead of dropping our hero, you click when the gauge is at its highest to launch him forward. You may have to gather a certain amount of sushi in a level, or travel a certain distance, and there are objects that both help and hinder you along the way.

It’s always risky to make an installment in a series that deviates drastically from the rest, but Sushi Cat-a-Pult was, unsurprisingly, a hit with players who enjoyed the new playstyle. Was it the fast-paced, addictive arcade gameplay? The gorgeous upgraded graphics? The feeling that you had finally found your spirit animal… a creature whose productivity was only motivated by vast amounts of free food? All of the above!

I want you to close your eyes and imagine something for me. You’re young. Still mostly innocent. Maybe the world has knocked you around a little, but that’s okay. Because you know that there will always be those you can trust, those you can rely on to never hurt you. You don’t guard your heart around them.

Right up until the moment they trip you and you fall flat on your face while they point, laughing, and everything is in slow motion and black and white while Gary Jules’ Mad World plays. What I’m saying is, the 2015 April Fool’s prank where Armor Games promised us we were getting a vast, player-generated sandbox multiplayer Sushi Cat game and instead mockingly delivered an endless loading screen was the day I learned the world was a lot crueler when I thought. You monster.