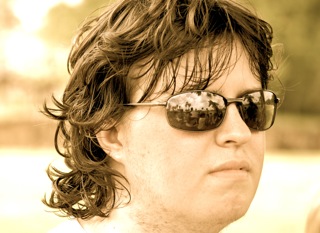 This week we bring you an exciting Interview with the creator of the Indestructo and Shift game series!

Hi, could you tell us a little about yourself and what you do?
Hello, my name is Antony (or Tony, if we’re friends, and if you’re reading this then we are :p ). I make flash games for Armor games that hopefully people enjoy playing. I live in Cardiff, in the UK with my lovely wife Lucy and lovely daughter Ella, who I plan on raising to be the youngest flash game author of all time, just give it a few years.

What sparked your interest in Flash development, and how did you get into it?
My introduction to Flash development started in late high school when my friend Matt started doing little animations in it and named his online flash persona as “The-EXP”. I joined in on some of the things he did until one day when he showed my a simple game he made using the mysterious “actionscript” part of Flash which I had until then been ignoring. It was about a boat which sailed up and down according to arrow key presses. Well that was pretty much it for me, I decided I had to make a game in it, and found out, to my surprise, that the coding wasn’t very much different to my other love at the time, which was RPG maker, a piece of software I still hold dear to my heart, and something that every budding game designer should play about with. Since I didn’t think I’d be going anywhere serious with my Flash games, I asked Matt if I could just upload them to various sites under his account name, which was usually “The-EXP”, and that is pretty much the stroy of how I hijacked his online presence and to this day feel too guilty about it to change the passwords despite it being very insecure 😉

Where did you get the inspiration for games such as Shift and  Indestructo Tank?Shift and Indestructotank are, for the most part, the games that people recognise my name for, and are probably two of my favourite games to work on. The inspiration for Shift came after playing “Portal: The Flash version” by Ido Tal and loving the idea of a platform puzzler game in that setup, but knowing I’d not be able to top how well Ido had done a Portal game, so looking for another “hook” as such. I remember waking my then soon to be Wife Lucy up at 3am to show her the prototype, which is an activity only ever done when I know I have something good enough to show to avoid being strangled by a grumpy half asleep girl.

Indestructotank started when I played a game called Heavy Weapon on Xbox Live and thought to myself how easy it would be to make something similar in Flash, so I did, not intending to ever release it as a game, but more of a learning experience. Then while working on it I was talking with someone I’d recently met in University called Joel Atkinson, who I was sending the prototype versions of back and forth. One of the versions I sent had a little bit of physics programming in there to make the tank bounce when hit, and if, for example, it hit a helicopter, it would give you a bonus point. On playing this, Joel suggested that each time you hit a helicopter, you should be blasted further upwards, and to make it a side challenge to hit as many as you can before you hit the floor. Then we decided to take the ability to shoot from the tank completley and make the entire objective of the game to rack up “Combos” jumping from helicopter to helicopter. When the game was released and it was rated extremley well, I was pretty much in shock that I stood in for a chance to win the Armor Games contest. In the end, it was beaten to the top spot by some Australian game, I forget its name, I think it was called the Latest Stand or something, you’ve probably never played it…

Which of your Flash games is your favorite, and what makes it your favorite?
My favourite game to play, is actually an old one I made called Ignitopulse, as I can play it for quite a while before getting bored, one of the ones I had most fun making was “Virtual pet reindeer“, as I made it with my wife, so while lacking in a fair few ways, the production of it was lots and lots of fun. Then of course there’s Indestructotank, which I alwasy feel compelled to finish if I start up a game…

Are there any games you currently have in the works or any games planned for the future?
I currently have the BEST version of Shift I’ve ever made in production, it’s also by far the largest game I’ve ever made and should appeal to people alot more than Shift 4, which was, in retrospect, much too hard, and not appealing to newcomers to the series. It will be lots of fun to play. I also have 2 or 3 games mid production that need to be finished, one being a nice simple tower defense based on Turn Based Battle, so I look forward to a bit fo time to finish those after Shift, to increase my overall output.

What do you like about developing for Flash as opposed to other platforms?I think Brad Borne, the developer of Fancy Pants adventure, described it best for me. Flash is the only platform in the world currently that offers both freedom and flexibility. Flexibility  in the sense that it’s powerful enough to make anything you want in, as long as you’re not aiming for Gears of War style graphics and the fact you can basically draw in what you want, and build the game around it, and flexibility in the fact it’s available anywhere in the world, on any operating system, without having to make lots of changes. He told me that the cartoonish nature of Fancy Pants and the fluid ways in which he literally draws the levels would just simple not be possible on other platforms, and I of course agree.
When you are not developing Flash games what are somethings you like to do?
In my downtime I like to take my wife out to dinner and spend time with Ella, who is for the most part, very well behaved while Daddy is doing his work. She has her own laptop, and can already surf the internet aged 3, so she’s well on her way to making her nerdy father proud. I also like to play other peoples Flash games alot as well as play some Gears of War 2 online. Theres nothing better to relax to than shooting up some locust horde.

How do you like living in the UK?
Living in the UK has its problems, everything is very expensive and the weather in Wales, where I live, is pretty much terrible year round. However, for the most part the people here are all very nice, and that’s whats really important I guess.

I hear you’ve visited the Armor Offices. How’d you like CA? Do you have plans to come back?
California was an amazing place, unfortunately first time I visited I underestimated how nice the weather would be, and ended up with rather severe sunburn. The Armor office is a really nice place and I’d visit it again anytime possible. I spent a couple of hours working alongside Dan and John which was alot of fun, and then went go-karting and partook in a medieval style dinner of Meat and Grog and a show in which Knights battled to the death for us, which I can only assume is how every day at the office ends. It really was a great experience and would love to work out there.

Is it true you wear a monocle, have a british accent and enjoy High Tea everyday?
Monacles are so popular in this country that many people wear two at the same time, using a special type of frame that holds them in place. I think they’re either called Dualacles or “Glasses” depending on your standing in society. My British accent, while not as awesome as the Queens or the Super Flash Brothers’ accents, is still rather spiffing, and as for Tea, both high and low, I enjoy as much of it as I can. Sometimes if i’m really lucky I have crumpets as well. The sad thign is I’m not even kidding, Tea and Crumpets rock.