Wishlist Never Give Up on Steam 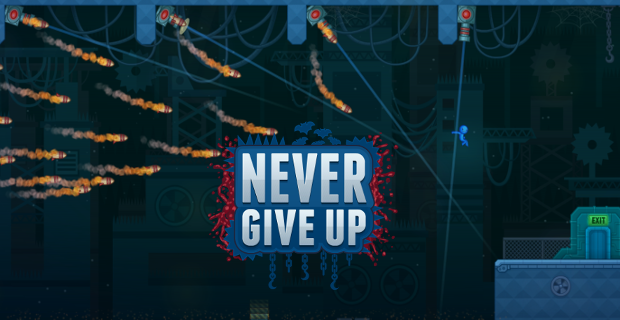 Sometimes it can feel like the whole world is out to get you. Usually, that’s just you being crazy, but for a certain little blue guy who suddenly needs to run, jump, and slide his way through everything from buzzsaws and missiles to giant mechanical rhinos, it’s a very real thing. And hey, if relaxing via extreme difficulty twitchy, bloody platforming sounds like your proverbial cuppa, then good news for you, because Never Give Up is now available for wishlisting on Steam!

Following Give Up and Give Up 2, Never Give Up is far bigger than its free online counterparts, with over 180 levels, plus a level editor to make and share your own stages, plus play the cruel creations of others. After a lot of hard work from developers Massive Monster and our own esteemed Tasselfoot, the game is finally nearing completion. Check out the official website to learn more about Never Give Up, and wishlist the game on Steam to be notified when it releases!