Wishlist The Adventure Pals on Steam 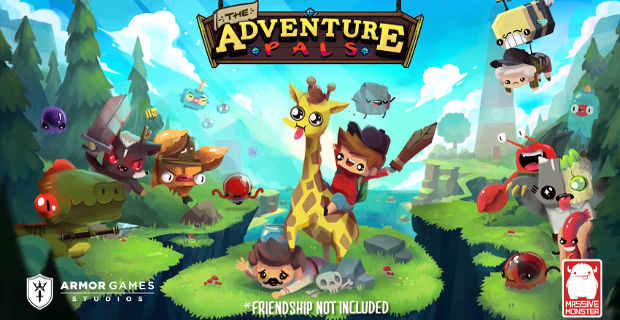 Do you like friendship? Do you think old people should NOT be turned into hotdogs? Do you believe giraffes are magic creatures that live inside backpacks and have helicopter tongues? Then you should wishlist The Adventure Pals on Steam, the upcoming action-adventure platformer from Massive Monster coming in 2018! After a successful Kickstarter and Greenlight campaign, The Adventure Pals’ team has been banging away at it in the development smithy. Wishlist the game now on Steam to be notified when it’s available! The game will also be launching simultaneously on Nintendo Switch, PlayStation 4, and Xbox One.

In The Adventure Pals, it’s your birthday. (Hooray!) Unfortunately, the celebration is cut short when your Papa is dad-napped by the evil Mr. B. (Boo!) Turns out Mr. B has a plan to turn all the old people into hotdogs, starting with dear old dad. Good thing you have Sparkles, your mighty giraffe bestie, and your friend Mr. Rock, who is… um… a rock… to help you save the day. What starts out as a quest to save your family quickly turns into a quest to save the world as you discover Mr. B has a lot more on his mind than bratwurst!

A combination of action-packed platforming and RPG elements, The Adventure Pals will take players to the sunken city of Crablantis, a ruined wasteland where toast and dinosaurs vie for supremacy, and far beyond. It’s inspired by classic games and cartoons, and is packed with beautiful but bizarre locations, weird but lovable characters, and good vibes. We hope you’ll wishlist The Adventure Pals on Steam and help us share the news!