Game Features I Frown Upon 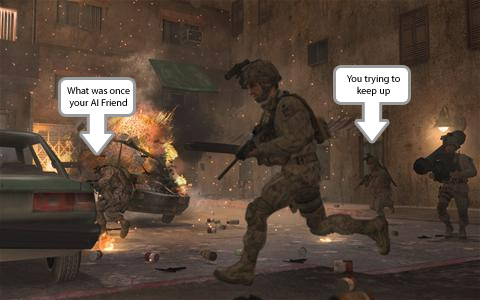 There are a few things bugging me about Console games and I see them slowly seeping into Flash games.  A few game mechanics are making games more difficult and less fun to play, which causes a lot of friction when trying to beat a game for the first time.  I think there are good solutions to these problems, so I hope that they will be fixed for the sake of my sanity.

I have found recently that games are starting to mask how much health you actually have.  Instead of a solid number or a bar of some sort, games use other means of telling you how much health you have.  For example, in Gears of War, the screen starts to turn red and an icon in the middle of the screen starts to appear.  For one, the amount of red pixels on the screen is not a very good indication of how healthy I am.  It’s really hard to judge whether I am nearing death, at death, or just approaching death.  A lot of really brilliant gaming moments are when I am rushing into a battle with close to nil health, and being able to survive it… but without a health bar, how do I know what to do?  Should I hide and heal, or go at it?  Will it be a few bullets or one to get killed?  I need to know!  It’s hard to judge a red screen and say, “hey, I count 20 red pixels so I must be near death!”.  I want health bars please.  Or quite possibly, have both the red screen and a health bar?

It’s convenient, but a camera is not always going to be at the right angle for doing things in a Third-Person game.  An example of this is Super Mario Galaxy… the camera is pretty darn good, but sometimes it’s not in the proper place.  I find that it becomes frustrating to move around and do things when the camera is point straight at my face.  Super Mario 64 had a really nice camera system, that was both free-moving, POV, or even completely manual.  Hopefully games will realize that I don’t always want the camera whizzing around automatically, and that sometimes I need to be able to see in front of me to move!

I find a lot of games have the AI set to know exactly where to go, so your buddies will always run ahead of you in the right direction.  That’s great and all, but I love exploring.  I like the idea of running around and finding areas, taking in the scenery, etc.  I don’t like the idea that the AI are going to run ahead before you even see an enemy, and when you get to the fight half your friends are dead and the enemy is almost completely wiped out.  I think AI should at least have a couple settings (like in Mass Effect) that allow them to at least be set to “Run ahead, see if I care” or “I’ll be the leader”.

Games tend to always have voices during cutscenes.  Then there are moments right before levels when the players are talking, and that’s fantastic too.  But then you get mid-level events, and the characters start talking… with text boxes.  It’s suddenly like the game decided that the music was too important and that any dialog would hurt the overture; but quite frankly it just sucks me out of the game and back into reality again.  Games like Viva Pinata clears this issue by having all dialog in-game being voiced, and other games have no voices which works too.  I can handle reading text for an entire game, and games that only have text are fine.  But there is friction in gaming when suddenly the character’s voice is gone, their mouth is moving, but there is now a speech bubble instead.  One or the other is the best way to go.

5)  Games Without a Climax

I’ve been playing this game for 30 hours, and what’s at the end?  Nothing!  The game is banking on you buying the sequel, which sadly has yet to even be finished by the game studio.  But knowing that a sequel will take another year or so, I just feel bad.  I think there can be a better way to do this.  Games really need to be made in the style of Harry Potter: even though each Harry Potter book is part of a large 7-part story, each manages to end on both a cliff-hanger and with a climax.  I feel like games are just leaving me with the cliff-hanger these days, and I wish there would be a bit of closure to my romp through the jungle for the past 30 hours of my life.  I love the mystery of a concealed story but I need some reward or epic battle.  Reward me but make me hunger for more!

So that’s my take, anyone have any other mechanics or styles of gameplay that irk you?