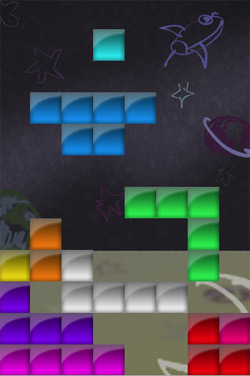 After several years of Flash/web game production, for the first time ever Armor Games has launched a game… somewhere else!  Our first iPhone game, Phit, recently launched for the iPhone and iPod Touch.   Phit is a notch above it’s predecessor with over 100 levels of aggravatingly challenging puzzles and a nice facelift of graphics and features.

The premise of Phit is simple:  Drag blocks around the screen to fit them into the shaded region at the bottom of the screen.  This is simple at first with just a few blocks and a few different possible arrangements.  But as the blocks become smaller and more tangled it definitely becomes a challenge.  Personally, by level 22 I was beginning to feel the pressure.

On a personal note, it was really interesting to see the dynamic difference a touch interface can make for a game like this.  The game feels much more controllable with finger-based controls instead of the mouse, and being able to shove tons of blocks around with multiple fingers is much more intuitive.

Phit is avaiable via iTunes and works on the iPhone and iPod Touch.  If you have either, you can purchase the game for $1.99 via the iTunes Store (link).  It’s definitely a treat and something that works perfect on the iPhone/touch for bus rides or on your lunch break.  I’ve probably spent about an hour on it already just from small game breaks from doing my own programming.  I’m sure you’ll enjoy it :).