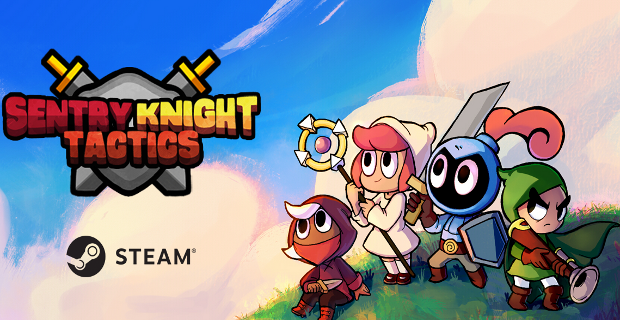 Baddies beware! Evil from beyond our world may stalk the land, but while the peasants quiver in their homes, three heroes set out to set things right, one glorious battle at a time. Armor Games is pleased to announce the release of Sentry Knight Tactics, a challenging and charming real-time indie strategy game from Tyler Myers and Justin Wolf, available on Steam. Together with the Marksman, Priestess, and a few new powerful allies, the Knight is ready to save the kingdom. Craft and upgrade legendary equipment, smash your foes in challenging combat, and journey across a vibrant, colourful world full of secrets and danger.

Sentry Knight Tactics is the first commercial release in the Sentry Knight series of online games enjoyed by millions of players. Thanks to the support of fans, this is the biggest Sentry Knight title yet, and we hope you’ll support its release by picking it up on Steam, or just sharing the news. For the first week, the game will be 10% off to thank the fans who made it possible.

To celebrate, we’re giving away ten copies to ten lucky winners. For a chance to win, just leave a comment on this article telling us which of the original three Sentry Knight games is your favourite and why. Winners will be chosen at random on Wednesday, October 5th. Only one entry per person will be accepted. Players attempting to spam entries will be disqualified.