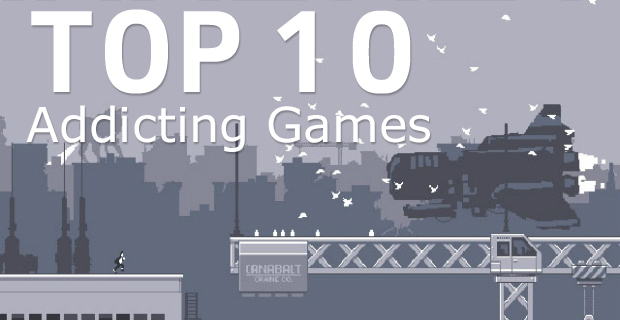 “Most addictive.” That’s a bold claim, eh? But… how, exactly, do you measure how addictive a game is? Whether you just-one-more-turn’ed yourself into watching the sunrise? When your pet decides it would be faster to evolve thumbs to feed themselves? However you define it, Armor Games has a lot of it.  So here, in no particular order, are ten of the most addictive games on the site! Go on, give ’em a click… your productivity may not thank you for it, but I bet your stress level does! Of course, these are just a few of our favorites… what about yours? 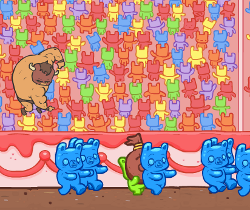 I’m not saying that the more ridiculous a game sounds to explain the better it is, just that it’s more fun telling people in Juicy Beast’s 2011 smash-hit launch game you play a burly man with the head of a beast, who’s schlorped into Candy Land where he’s expected to perform for the bloodthirsty gummies. Naturally, this offense will not stand, and rather than bust up the ring, you launch yourself out of it and see how far you can fly for escape, bouncing on (and bursting) fleeing gummies to propel yourself farther. It’s packed with upgrades to unlock, not to mention a snazzy soundtrack, making Burrito Bison one seriously hard to put down bull. 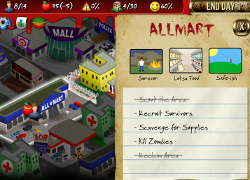 A lot of zombie games are focused on things smashing through windows while the music goes REEEEEEEE and you desperately try to remain in possession of all your squishy bits. That makes games like Sarah Northway’s unexpectedly complex combination of town management and strategy all the more compelling. The goal is to eventually rebuild your small, struggling band of survivors into something resembling a functioning society again. Doing so involves careful planning and management… you need to keep your people cared for and protected, but you also need to focus on expanding your borders. You can convert captured territory into a number of facilities to help your community grow, though you’ll also have to deal with zombie sieges. What’s really cool, however, is how many different ways there are to win. Do you hunt for a cure to the contagion? Seek out a way to abandon your responsibilities and save yourself? Let your people take on a strange new religion? Rebuild 2 is easy to pick up, but hard to tear yourself away from. 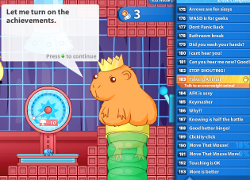 If you’re one of those people who can’t walk away from a game until your proverbial belt is confidently jangling with all the achievements it has to offer, prepare to sweat a little. Jmtb02’s precocious pachyderm has been around for a while, and here our blue buddy has a whopping 400 achievements to figure out how to trigger, plus a whole host of additional unlockables. Following the  allure of the “free candy” pipe, you find yourself  employed by a huge hamster king who wants you to get him pellets. He’s going to reward you for every certain number of pellets you bring him, which is done by flinging yourself through the rooms filled with spikes, chutes, and much, much more to find coins to turn in for hamster grub. The real reward is unlocking all of the many, many, many achievements on the list, although chances are, figuring out how to do so will take some time. It’s weird, sure, but that’s part of its charm, and its eye-popping colour and zany gameplay is easy to like. 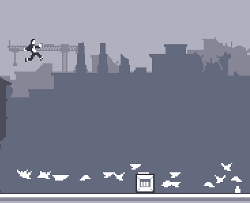 These days “endless runners” are just about everywhere. You keep running and jumping for as long as you can, avoiding pitfalls and other obstacles, until you get the highest score possible. If you’ve played and enjoyed one, arguably it owes a lot to the existence to this moody, striking little gem by Adam Atomic. Made in just five days, you control a man fleeing for his life through a crumbling city. In the background, you can see enormous shapes tearing one another apart as the ground shakes and glass shatters, but taking your eyes off your feet is a bad idea, since one split-second mistake means game over. All you can do is control when he jumps, trying to avoid falling off the edges of buildings or stumbling over obstacles, or missing a window. It’s an extremely simple game, which is understandable given its very short development time, but its minimalist presentation and a stellar soundtrack by none other than your friend and mine, Danny Baranowsky, makes Canabalt one of the greats. 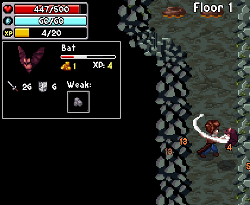 Something about randomized dungeons, piles of enemies, and endless, endless loot just plugs into something deep in my lizard brain. Dustin Auxier’s dungeon-crawling RPG has a little whiff of roguelike about it that caters to that greedy impulse, as you play a hero delving deep into a cave filled with treasure and danger. The layout is different each time, and the only way to leave is with a special item, while only equipment that isn’t cursed can be kept from one run to the next. While there is a story to be had about the cave, which you’ll uncover as you find the many secrets strewn throughout, the simple, grindy gameplay is so easy to lose yourself in that you can find the hours just falling away as you hunt for more and more powerful weapons, armor, and other items, leveling up your hero. In fact, it’s so addictive, that I opened it to take a screenshot for this article, and I… wound up… … … … uh, can we do this later? 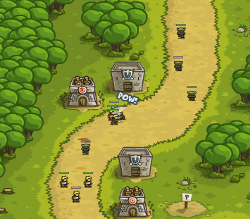 There’s something satisfying in being able to look at a franchise that’s gone on to sweep multiple platforms by storm to say you “knew it when…”. In Ironhide Game Studio’s adorable yet strategic defense game, your goal in each level is to stop the oncoming waves of enemies from reaching the other end of the playing field by building various stations that spawn different types of heroes. The soldiers that come from the barracks, for instance, will clash with foes and hold them in place as they fight. Each character has an enemy they’re strong and weak against, naturally, and it’s all about balancing your building in each stage to be able to defeat everything that comes against you… oh, and using all the gold you earn slaying monsters to upgrade your army, of course. If all that sounds very serious and epic, well, it may surprise you to see how absolutely friggin’ cute Kingdom Rush is, down to its very Batman-esque comic book-style sound effects during battles. Want more? Both Kingdom Rush: Frontiers and Kingdom Rush: Origins have you covered. 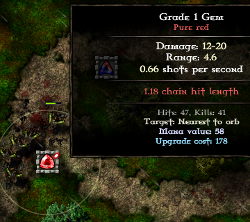 (Tower Defense, by Game in a Bottle)

Game in a Bottle’s GemCraft series has been around for a long time, and players have been hooked on it for years. Turns out tower defense games that are smart and strategic are rewarding… Who knew? The premise is that each level, you’re tasked with keeping your base safe from the monstrous bugs that spawn along the path and swarm towards it. Instead of building specific tower types, however, your mana is used to create gems with special abilities that, when socketed into towers, impacts the damage and adverse effects they impart. The real magic happens when you combine gems of different sizes and colours to mix all their abilities to your best advantage. You can level up skill trees, build talismen that change battles, and much more. GemCraft: Chasing Shadows is the latest in the series and has even made its way to Steam, but with tons of levels and a system that’s remarkably intricate, each and every GemCraft game is worth playing all the way through… though, uh. Probably not in a single sitting if you value your job and relationships. 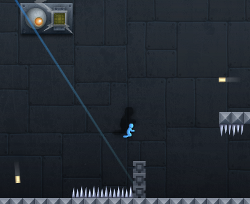 (Action/Platform, by Massive Monster and Tasselfoot)

When you think about it, nobody really expects a game to be “punishing” in the sense that it actively feels like the game kind of hates you and wants you to feel bad about yourself. And yet, that’s sort of what’s going on in this ruthless, bloody platformer served up by Massive Monster and Tasselfoot. The goal is to make it to the exit in each level, but when you do, the next level gets even more punishing. Spikes, invisible walls, laser turrets, missiles, and so much more, all of which mean an instant death, and all while you’re being mocked and belittled. Chances are not a lot of people expressly play games to be made fun of, but the way Give Up 2 layers new mechanics and dangers on top of an otherwise familiar level design is hard to walk away from. You keep pushing yourself, and the game pushes back, getting meaner whenever you succeed. It’s a perversely addictive formula, but one that’s rewarding as well… oh, and did we mention a new installment was successfully Greenlit on Steam? Awwwww yeah. 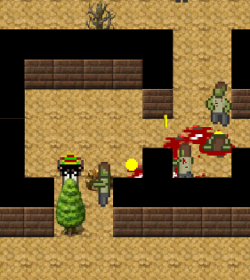 Even if, like me, you probably are best left without any significant military power to your name, global destruction and mayhem is what’s on the menu in this pixel-fied zombie arcade sim by Toge Productions. The aim is to take over the world using your zombie army by infecting all the civilians in each area. Once infected, they turn zombie themselves and attack whoever’s near, but while there are special civilian types that can’t be infected through ordinary means, you’ve got special zombies up your brains-stained sleeve, too. Back at your lab, you can spend the cash you earn to upgrade your zombies to make them faster, more durable, and so forth. Infectonator as a series has been around for a while, and World Dominator is just as quirky and gory as you’d hope. That “quirky” bit is important, and why Infectonator is so hard to tear yourself away from. Watching the world react to your slowly growing threat on the news, not to mention the way people’s happy, care-free trundling turns to terror is enjoyable in the sort of way that probably would be troubling if you described it to your in-laws. In my case, I was probably under suspicion from the moment I yelled, “I’ll show them. I’LL SHOW THEM ALL,” when they ran out of raspberry iced tea at the rehearsal dinner. 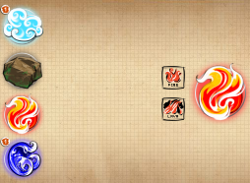 It’s hard to believe this series has been around for over half a decade, but in its unsullied original form, Elite Games’ zen-like puzzle game is almost hypnotic in its simplicity. You combine various elements, which in turn create new ones based on their interactions, which you in turn combine with others, and on and on until you’ve created all 115 available in the game. Things begin in a relatively straightforward manner, with fire and earth creating lava, for example, but the more you create, the trickier it gets to unlock new elements from combinations, though tragically, no matter how tearfully you match, Captain Planet will never appear. It’s beautifully designed, with a lovely mellow atmosphere, and there’s something delightful about figuring out how to make a new reaction… though you can simply brute-force your way through, if that’s what you’re into. Doodle God is easy on the eyes and ears, and proof positive that puzzle games can be just as addictive as those with high scores.