Con and I just launched our latest game called Crush the Castle. I tackled code and Con did the art. The game consists of destroying castles with a huge Medievil Trebuchet. What more could you want? 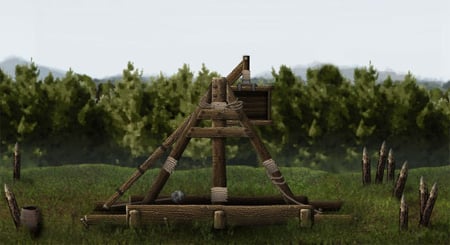 Little bit of history on this game, just about every one at the office here loved Castle Clout by Liam Bowmers so we decided to make our own version. We were lucky enough to get permission from Liam as well.

To give even further inspiration, John and I decided to make our own Trebuchet in the office here with a fair amount of success. After terrorizing the town with it for a few hours, it was off to actual development.

I started doing some research on 2D physics engines, and I realized there are quite a few out there. One of the most prominent ones used in the flash community that I saw is Box2D. Now I did some tests with Box2D and it is very fast and powerful, but one of the things that bugged me was that it was a direct port of the C++ version and that it had very little done to it for Flash optimizations.

I did some more research and found another awesome engine that suited my needs perfectly. It’s called Glaze and it’s made by Richard Jewson and it’s fast. Really fast. I mean I was able to throw quite a bit at it before I saw any stutter. This meant that castles could be huge and menacing without a big drop in performance.

Anyways, once I got the engine figured out the rest was just making the actual trebuchet. With alot of testing and data adjusting, I was able to finally get a realistic looking Trebuchet working. The best part was making my first castle and realizing how much fun it was to just demolish it. 🙂

Knowing that, I built a castle editor so you could crush castles of your own design. Let me tell you, nothing is more satifying than building crazy castles and destroying them with bombs. We created a forum post so players can post their own castles and rate others. Check it out when you get a chance, and see some of the castles created in the office here.

The game is done and finished so check it out on Armor Games Crush the Castle.